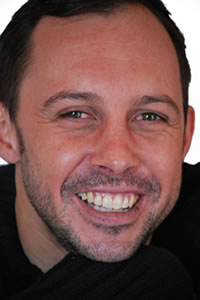 Work with internationally renowned hypnotherapist and healer, Harry Gamble. Harry assists willing individuals to overcome deeply ingrained mental and emotional blocks. Through the use of hypnosis and metaphysical healing techniques you are given an opportunity to dissolve issues, addictions and problems that you carry from a lifetime of patterning and conditioning.

Whether you are looking to overcome addictive behaviour patterns or to simply begin living a life filled with more happiness, Harry offers you the keys to rediscovering your inner resources, unlocking the strength and the will-power that has always been there.

Harry Gamble is an adventurer, cosmic comedian, healer and teacher. Harry began his career in mystical experimentation at an early age when he was faced with the trauma of Methodist Sunday Schooling and an Anglican Boys-Only Private Education. After numerous attempts at making sense of what he was told God expected of him, Harry gave up on being a good little boy.

Finally, after attaining the liberties granted a young adult, Harry was able to go in search of someone who could give him proper instruction in the pursuit of true knowledge. Through Patrick Desplace, founder of WDHR, Harry received the training that he desired, things began to make sense and then very rapidly they completely stopped making sense in a logical way, which was disconcerting, but satisfactory. Harry also joined a number of mystical orders including AMORC and took training in Hermetics, Zen and Kabbala.

Harry is trained in the arts of Western and Eastern Metaphysical Healing, Hypnosis through the South African Institute of Hypnotherapy, Shamanism, Celtic and Eastern European Druidic Magick and modern meta-psychology through WDHR. Harry is a master at creating the space for you to safely and gently remove the blockages and encapsulations that you have placed within your psyche, allowing you to find freedom, love, life, caring, respect and adventure.